Circular harbour of Amsterdam – Palace of the people 2016

How can the biggest oil harbour in the world contribute to the future economy of Amsterdam? This was the question that lead our work during Volksvlijt (the people’s palace). Twelve urban designers developed,  in an open and active process, during 2015 and 2016 a vision for the city of Amsterdam. We did research and designed the circular harbour campus. The results were exhibited in the summer of 2016 at the Public Library of Amsterdam with a festive opening the 12 of april 2016.

Volksvlijt2016 is a platform for the open city of the future.

One year of work by designers, businesses, educational institutions and residents of Amsterdam to develop twelve campuses in the metropolitan area of ​​Amsterdam. A campus is a place where people live, work, learn, innovate and recreate. Each of the campuses has its own characteristic, think of the FoodCampus Zaanstad and the Health and Wellbeing Campus Amsterdam Southeast. But all the campuses also engage each other. Together they form a strong and sustainable metropolitan region. 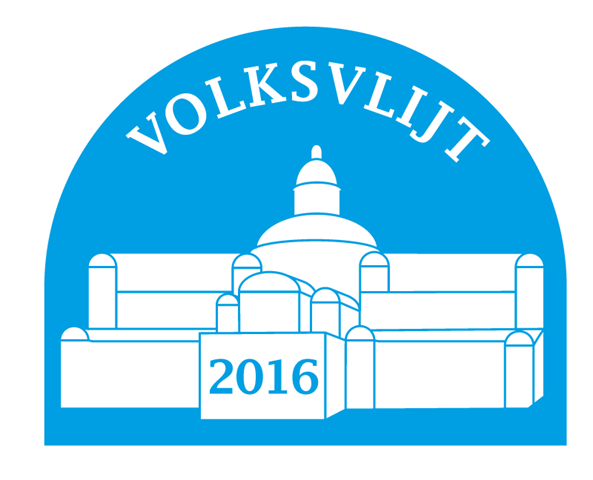 The results were exhibited in Amsterdam in 2016, during the Dutch presidency of the European Union.

Volksvlijt2016 is an open platform, inspiring and interactive. Anyone can contribute. In 2015 three open workshops were organized in which groups of visitors collaboratively worked on each of the campuses. During the year of the presidency of the European Union by the Netherlands, an exhibition at the public library of Amsterdam showed the results of the process. Parallel to the exhibition, a series of events such as debates, conferences, workshops, children activities and guided visits were organized.

Volksvlijt is a joint quest for a new economy and a new culture of planning.

Volksvlijt was initiated by the Wibauthuis Chair at the University of Amsterdam in collaboration with Amsterdam Institute for Advanced Solutions Metropolitan and Amsterdam Economic Board.

We worked on the circular harbour of Amsterdam.

Underneath you find a small introduction to the project:

Around the world, machines try to gain  gas, oil and charcoal from the earth,with more and more difficulty. At some point, in a not so far future, all these fossil fuels will be exhausted. Then what? At the same time, using these scarce fossil fuels is polluting our air and environment. Are there other possibilities?

Of course! The circular economy in which products are made of healthy materials is an opportunity. These products are not thrown away after use, but become raw material for new ones; closing in this way the circle. It is clean and infinite. The harbour of Amsterdam is nowadays really dependent on fossil fuels. Did you know that our harbour is the biggest oil harbour in the world? and the second coal harbour in Europe? If we want to orientate our life towards circularity, then our harbour becomes a big problem. The harbour is forced to change and adapt to the circular economy offering space to circular companies. Together the opportunity emerges to connect the harbour again to the city of Amsterdam and make Amsterdammers proud of their harbour, fourth harbour of Europe, employer of many and our door to the world. The harbour needs to adapt its existing infrastructure in order to add value to the city.

In the exhibition we tried to put forward some central issues:

1. awareness: to illustrate in very direct way the fact that the harbour of Amsterdam runs on fossil fuels. Currently the storage is occupied by about 80% with fossil fuels; this means limited, destined to end, and polluting. We used barrels of oil and showed the unbeautiful canal houses covered in oil and surrounded by coal mountains.

3. the future: offices such as McKinsey have drafted different business models for the circular economy. We applied some of these models to the harbour. Currently, the harbour acts as a linkage between different economic chains. In the future, the harbour will become a linkage in a new circular economy. From being a stage in the transport of coal, to a stage in the energy system of Amsterdam and the center of recicling of  waste arriving from the whole world. At the same time, by improving the accessibility to the harbour, new functions an smaller scales become possible, improving the diversity of a current rather mono functional harbour and icreasing the funcitonal linkaes with the city of Amsterdam. These ideas were visualized through a large model in the exhibition. 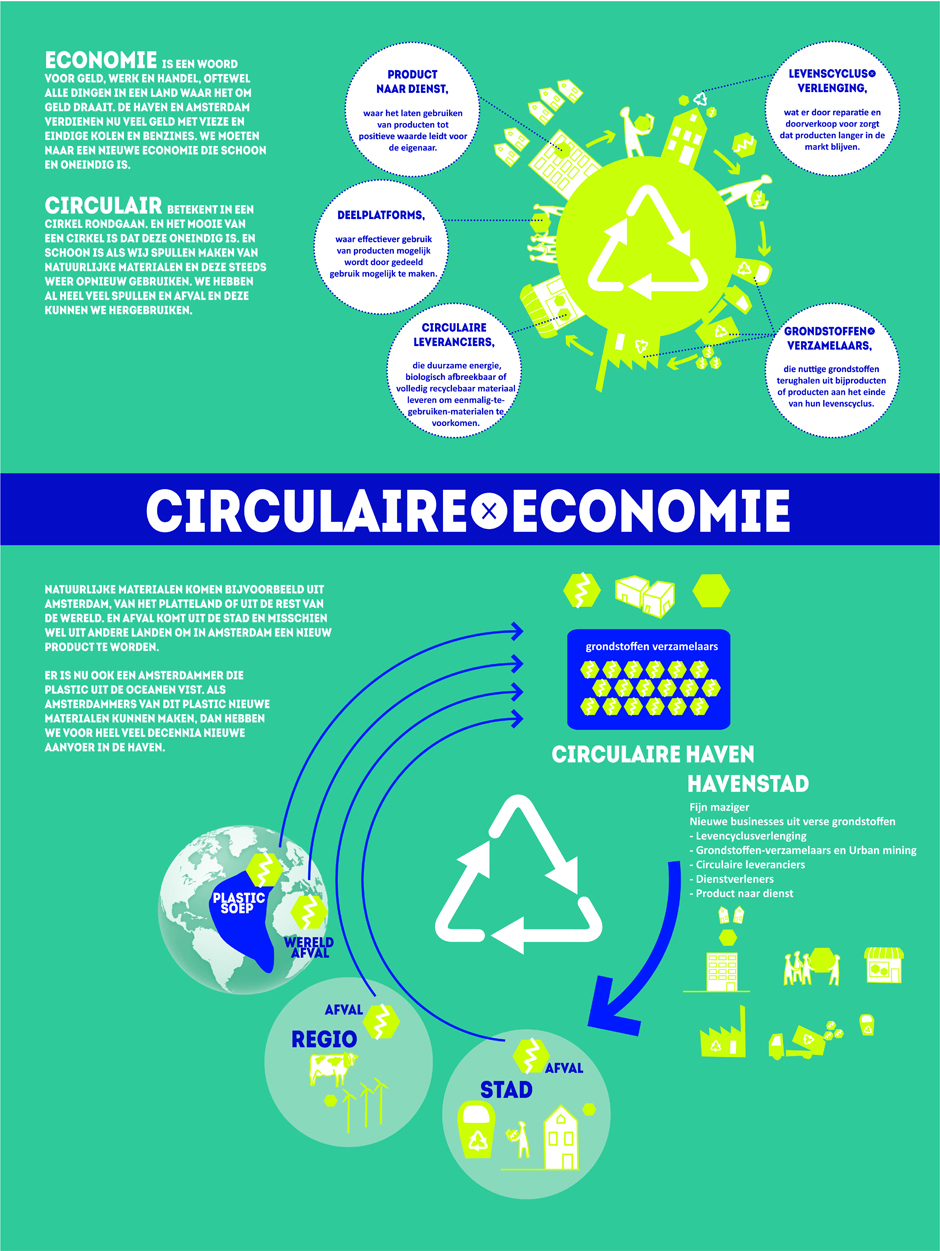 lectures, debates, workshops and excursions were organized to spread the message and enlarge the discussion. In the first debate, we had speakers from the Harbour of Amsterdam, Waternet (water company), the municipality and the Economic Board. The second debate, organized together with Amsterdam Fossil Free, discussed the way to accelerate the transition towards a Fossil Free harbour. In collaboration with Wij krijgen Kippen and Fossiel Free Amsterdam, we organized a breakfast to collect more ideas. For children there was also something to do. They could for example fish for plastic in the canals of Amsterdam, facilitated by the Plastic Whale. Ica van Tongeren from R4mers guided a series of workshops for elementary school children in which they created new products from waste.

Around our project there were diverse press articles published such as in the Parool (click here). The magazine of the harbours of Amsterdam dedicated a special issue to the circular harbour, with articles by the speakers from our first debate. 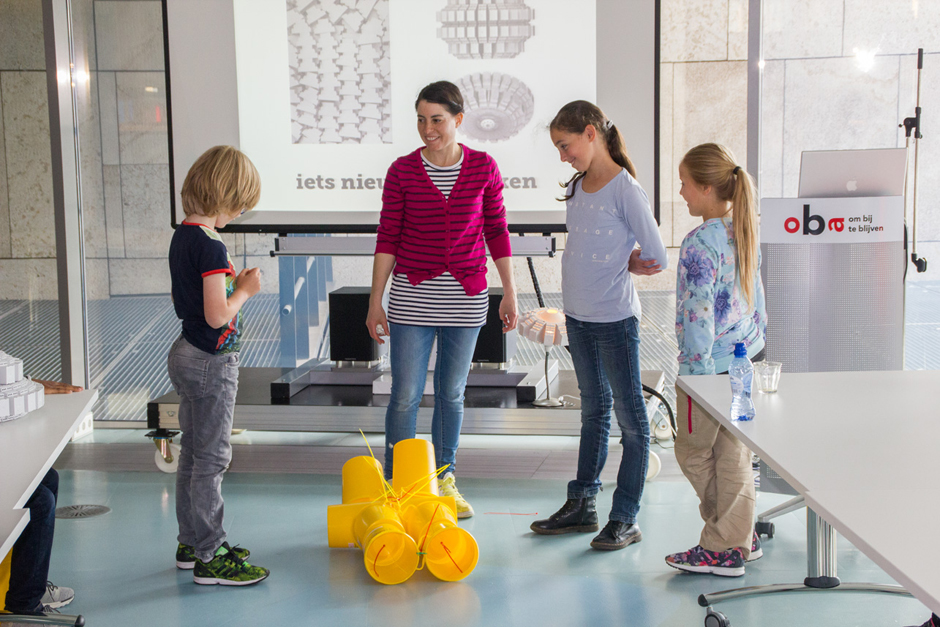 Photo by Ray Edgar from Re4mers.

A book about the exhibition was launched in November 2017. The book “Dream Your Own Future” gives an impression about the making of the exhibition and all the projects. Pepijn Verpaalen of URBANOS wrote the book together with Marieke Berkers, Zef Hemel en Mirjana Milanovic and Thonik was responsible for the graphic design of the book.